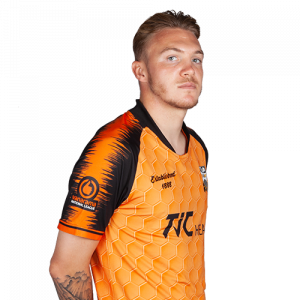 HARRY TAYLOR
MIDFIELDER
DATE OF BIRTH
04/05/1997
PREVIOUS CLUB
ACADEMY GRADUATE
SIGNED
01/07/2014
COUNTRY
ENGLAND
BIOGRAPHY
Harry Taylor’s career started as part of the Chelsea youth system in 2005, where he left in 2012 to join Barnet along with his brother Jack. After graduating from Barnet’s academy in 2014, the defender has since gone on to make 75 appearances in all competitions.

Born in 1997, the young right-back has had the opportunity to make himself known out on loan, making 21 appearances across two loan spell for Hampton and Richmond Borough and Staines Town. However, he’s had plenty of success at Barnet, making his first-team debut in the FA Trophy in December 2014, which led to him being named the Barnet Youth Player of the Year for the 2014/15 season.

Taylor can play both in defence and midfield in both wide and central positions. He commands the midfield when in the centre of the pitch and has an eye for a pass and breaks up play well. He also is superb positionally in the defensive unit and puts his body on the line to stop shots.

Harry is an extremely versatile player who can play centre-midfield one week and right-back the next, putting in a great shift regardless. Taylor had a very impressive 2019/20 campaign, which culminated in a man of the match performance in the Bees playoff eliminator victory over Yeovil Town.
Facebook Twitter Youtube Instagram