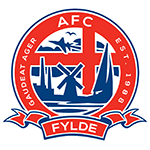 The Bees are back in FA Trophy action on Saturday when they travel to Mill Farm to face fellow National League side AFC Fylde in the quarter-final.

Darren Currie’s side, who find themselves three games away from a trip to Wembley Stadium, go into tomorrow’s clash off the back of a 0-0 draw away to play-off chasers Sutton United on Tuesday.

The last time these two sides met was in September 2018, marking the first competitive fixture between the pair.

The Points were shared at The Hive London as Daniel Philliskirk’s header cancelled out Shaq Coulthirst’s 20th minute opener as the match ended 1-1.

Dave Challinor was appointed Fylde manager back in November 2011 and has gone on to become a club legend after guiding them to England’s fifth tier for the first time in their history.

In his first season in charge, Challinor lead a Fylde side to Evo-Stik North glory after winning the title against Salford City but suffered play-off heartbreak the campaign after, losing in the final. However, it was a much happier outcome the year after as Challinor’s side clinched Evo-Stik Premier promotion after going up through play-offs. In their first year in the National League North, Fylde finished second but lost to Guiseley in the play-off final before suffering a similar outcome the following season. Challinor’s side then clinched promotion to the National League after being crowned champions before achieving a play-off spot yet again but were beaten in the qualifying round. Last season saw the Fylde boss guide the club to their highest ever league position in 7th and also reach the FA Cup second round for the first time in the club’s history.

Before taking charge at his current side, the Chester-born manager was in the Colwyn Bay dug-out, taking up a player-manager role in May 2010. It was a debut season to remember as he helped the club to a second place finish in the Northern Premier League Premier Division before achieving promotion through the play-offs.

Away from management, the Fylde boss also played for Tranmere, Stockport, Bury and Colwyn Bay during a playing career that lasted 17 years.

One to Watch: Danny Rowe

Currently the National League’s top scorer with 22 goals to his name, it’s no surprise that Danny Rowe is the one to watch ahead of tomorrow’s encounter.

The prolific striker has also found the net three times in the FA Trophy this season too, including a brace during their 4-1 replay win over Ramsbottom in the previous round.

Rowe will be concentrating on maintaining his scoring habit for the remainder of the season as Fylde push for promotion. However, for now, his focus will be on inflicting havoc on Barnet’s defence tomorrow afternoon.

Fylde have already exceeded last season’s FA Trophy run after they bowed out at the first round stage last time around.

The Coasters travelled to Chester and fell behind on 51 minutes after Ross Hannah broke the dead-lock. However, a late Serhat Tasdemir equaliser forced extra time where they would go on to turn the game on it’s head thanks to Danny Rowe. Lucas Dawson equalised for Chester though before the hosts won 5-4 on penalties.

It was a completely different story in round one this season as Fylde ran out 5-1 winners over Stratford Town.

Biggleswade Town were their opponents at the next hurdle where they would go on to win 1-0 thanks to a Nick Haughton winner.

Round three was nothing short of a dramatic affair when they travelled to Ramsbottom United. The initial tie ended 5-5, forcing a replay at Mill Farm where the Coasters eventually won 4-1.

Recent Form In All Competitions:

Fylde, who sit fourth in the National League, one point off the top three, have only lost once in their last five games in all competitions.

After that dramatic tie at Ramsbottom, the Coasters had to settle for another draw when returning to league action four days later. However, this one only ended 1-1 when they travelled to Maidstone United. Their 4-1 FA Trophy replay triumph followed before they fell to a 1-0 defeat at home to Chesterfield. However, they go into tomorrow’s game off the back of a convincing victory, beating Havant & Waterlooville 6-2 on Tuesday night.

The Bees were knocked out of the FA Trophy but penalties were required as Barnet will be left to rue missed chances in the initial 120 minutes.

The Bees had the better of the opening 20 minutes against their higher placed hosts, controlling possession , though the first chance of note fell Fylde's way on 24 minutes, when Bees keeper Mark Cousins pushed Haughton's ferocious volley wide for a corner.

Three minutes later, Cousins’ opposite number Jay Lynch was called into action at the other end, clearing a curling effort by Medy Elito which looked destined to nestle in the top corner.

Both sides had one more opportunity just before the interval, Wes Fonguck fired straight at Lynch, while substitute Alex Reid’s header was off target.

Barnet would have the first opportunity of the second half when Shaq Coulthirst curled a shot just wide of the right post four minutes in.

A good run by Haughton set up a further shooting chance 10 minutes later but his effort was blocked.

Fylde pressed in the dying minutes in a bid to avoid extra-time but two Haughton efforts flew wide as did one in between by Zaine Francis-Angol.

Fylde took carried this  momentum into the opening exchanges of extra-time, Cousins forced into saves from Philliskirk and Haughton.

But four minutes before the break, Barnet had the best chance so far when Fonguck's great low cross found substutite Simeon Akinola at the far post but somehow his effort was blocked on the line.

There were worried moments for Fylde five minutes into the second period as Lynch saved from Akinola and fellow sub Barham shot wide from close range on the follow up.

An unmarked Akinola had one more chance but headed over from six yards out and when Haughton's final effort at the other end was stopped by Cousins the tie went to penalties.

Fylde made no mistake with their first when Philliskirk fired into the roof of the net.

Captain Callum Reynolds then stepped up for Barnet but his spot kick cannoned back of the crossbar.

Haughton then gave Fylde a two goal advantage before Barham buried his spot kick into the bottom corner.

Bond made it 3-1 before Fonguck hit the post, making it match point Fylde.

Alex Reid stepped up and fired his spot kick home, winning the shootout 4-1.

The Bees head to Mill Farm this Saturday to take on AFC Fylde in the Quarter Final of the Buildbase FA Trophy.

Travelling Barnet fans have the option of seating in Block A of the Main Stand or standing on the covered South Terrace.

Tickets can be purchased in advance and printed at home.

Tickets can also be purchased on the day from the Ticket Office, although it is advised to buy in advance to prevent any potential delays/queuing.

Please note that free onsite parking at the stadium is available but limited. Once the free parking is full, the overflow carpark is available at £5 per car.

For those travelling by train, the ground is just a 10-minute walk from Kirkham & Wesham station.