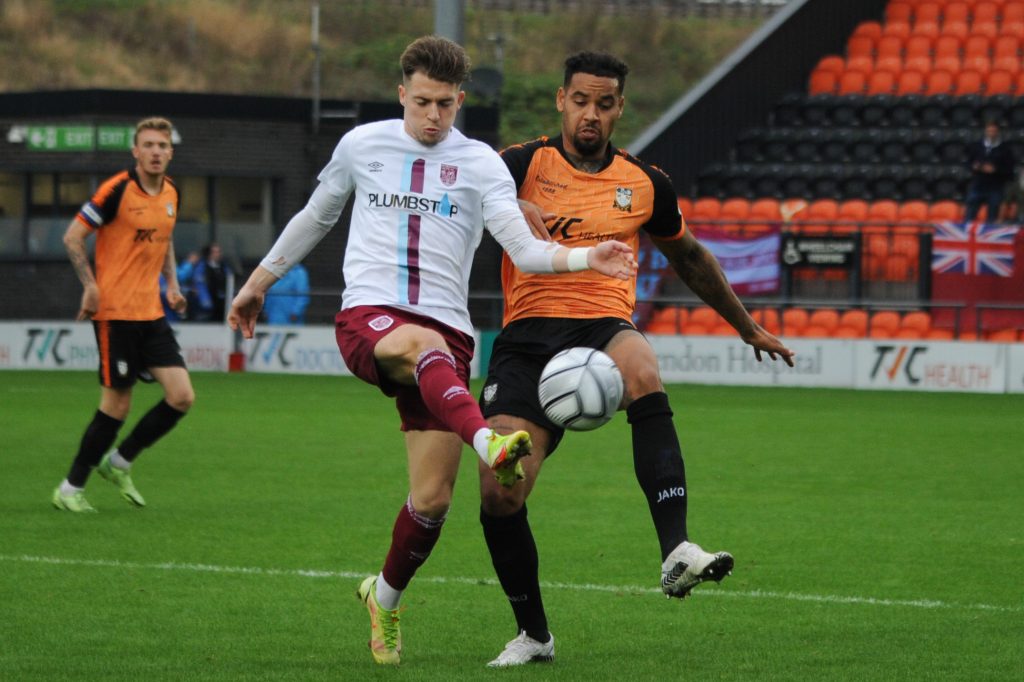 The Bees secured their first three points of the season – beating Weymouth FC 3-1 at The Hive London.

The visitors had the first chance of the afternoon as Josh McQuoid’s cross into the box was cleared behind by Sam Beard. Sean Shields put the resulting corner into the box as it pinballed around before falling to Tyler Cordner who drove his low effort into the arms of Sam Sargeant.

Dean Brennan’s side responded with an impressive spell of pressure. Mitch Brundle picked up the ball on the edge of the box before finding Sam Beard towards the byline who fizzed the ball towards the near post only to get cleared behind.

The resulting corner found Kian Flanagan who turned away from his defender and unleashed a powerful strike that was blocked away..

Brian Stock’s side almost opened the scoring after 15 minutes when Josh Leslie-Smith latched onto the end of a deep cross into the box, but ended up volleying wide from close-range.

Following a spell of Bees pressure, the Terras had another chance to break the deadlock in the 26th minute when Cam Murray passed the ball out wide to Shields who played the ball towards goal only to be denied by Ben Richards-Everton who was there to clear away off the line.

Sean Shields looked to cause the Bees’ backline more problems when Josh McQuoid fed him the ball just inside of the penalty area. Weymouth’s No. 32 looked up and saw his deflected shot fly into Sargeant’s gloves.

The Bees took the lead in the 33rd minute after Josh Payne placed his corner onto Mitch Brundle’s head, who thumped his header into the top left corner to give the ‘keeper no chance and go into the break with the lead.

Brundle almost added his and the Bees’ second of the afternoon after he did well to get on the end of a looping forward pass into the box. The No. 8 watched the ball drop over his shoulder before flicking goalwards and forcing a smart save from Fitzsimons.

Dean Brennan’s side continued to further extend their advantage and almost did after Mason-Clark weaved his way into the box from the wide angle and blasted a shot towards the near top corner to make the Terras’ stopper palm behind.

Payne took the resulting corner and floated the ball into the centre of the six-yard area to Mason Bloomfield who leapt above his defender to send his header just over the crossbar.

Weymouth almost levelled in the 58th minute after they crossed into the box before the ball fell to Andy Robinson who blasted his first time effort just past the upright from 20-yards out.

The Terras found the equaliser in the 70th minute as Shields picked up the ball down the left flank before curling his cross to Brandon Goodship who flicked his header into the bottom corner, beyond the outstretched arms of Sargeant.

With 11 minutes left to go, the Bees retook the lead as Daniel Powell won the ball high up the pitch before bringing the ball in-field and laying it off to Adam Marriott.

The 30-year-old took it past a defender and slotted calmly into the back of the net to score his second of the season.

Dean Brennan’s side rounded off a spectacular afternoon when they added a third in the 85th minute.

Sam Beard whipped the ball over to Richards-Everton whose towering effort bounced down off the crossbar and into the goal.

Marriott was on hand to tap the ball into the empty-net but the linesman had already awarded it to the defender.