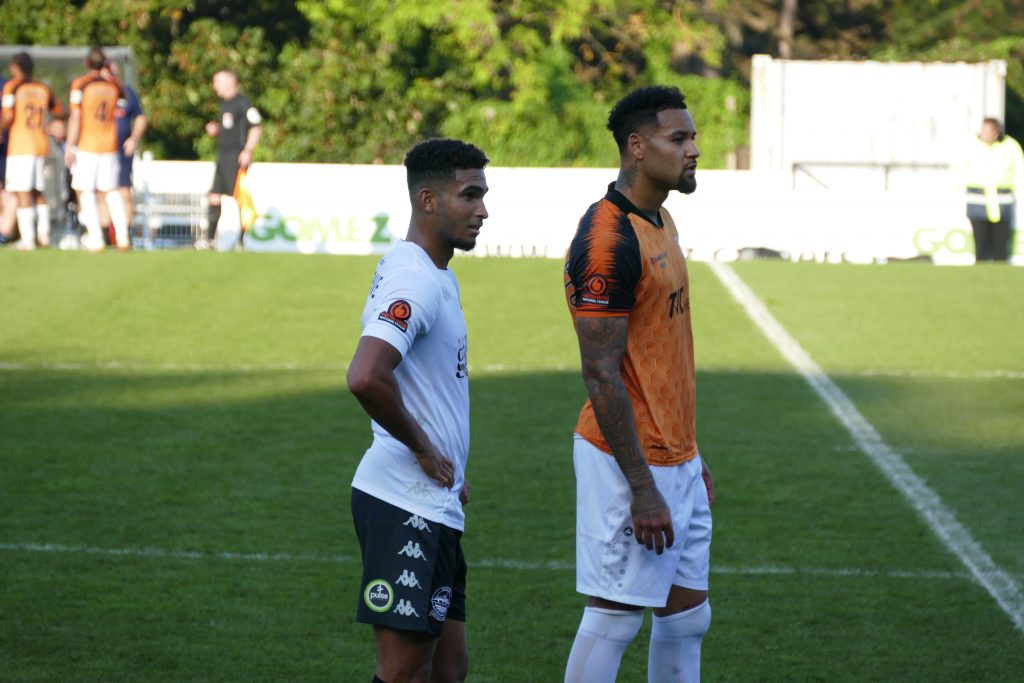 The Bees secured the first three points away from home this season – winning 2-1 at Dover Athletic in the Vanarama National League.

Dean Bennan’s side started quickly and found the net after two minutes when Ephron Mason-Clark weaved his way down the right flank before playing the ball to Daniel Powell.

The Bees’ No. 10 picked out Mason Bloomfield in the centre of the box who poked home at the far post, however the linesman had raised his flag for offside.

After some continued pressure, the Bees broke the deadlock in the 10th minute when Mason-Clark beat a defender to pick out Ben Richards-Everton at the back-post.

The towering centre-half headered back across goal to Mason Bloomfield who nodded in from close-range.

Dover responded and tested Aston Oxborough as Koby Arthurs picked up the ball and dropped a shoulder before striking the ball towards the top corner to force the Bees’ stopper into an acrobatic diving save.

The hosts went close again in the 26th minute when Sam Wood bent his free-kick from distance towards the near post.

Aaron Cosgrave got infront of his defender to flick his header past Oxborough and just wide of the upright.

Rob Hall had the first opening of the second half after he was first to react to Powell’s overhit cross into the penalty area.

The 27-year-old wideman turned and skipped past a defender inside the box before firing his shot into the legs of Parkes from a tight-angle.

Dean Brennan’s side doubled their advantage just before the hour-mark when the ball was played into Bloomfield who showed his strength to hold up the ball and play through Powell.

The Bees’ 30-year-old took it in his stride before calmly slotting low past the Dover ‘keeper.

The Whites pulled one back in the 64th minute when Aaron Cosgrave found space on the edge of the box to get his shot away into the bottom left corner, past the outstretched arms of

Andy Hessenthaler’s side almost levelled the scoring in the 70th minute when Ricky Miller found space to cross into Khale Da Costa at the back-post who sent his powerful, free-header into the arms of the Bees’ stopper.

Rob Hall looked to finish the game off and almost added a third midway through the second half when he raced down the right flank before bringing the ball in-field to find space to strike the ball over the crossbar from 20-yards out.

Kian Flanagan had a chance to wrap up the points for Dean Brennan’s side in the 82nd minute when he was played down the right side before sending TJ Bramble to the floor with some trickery inside the box.

The 22-year-old midfielder found himself in some space before sending his shot into the side-netting from close-range, to leave the Bees to secure three points with a one-goal advantage.