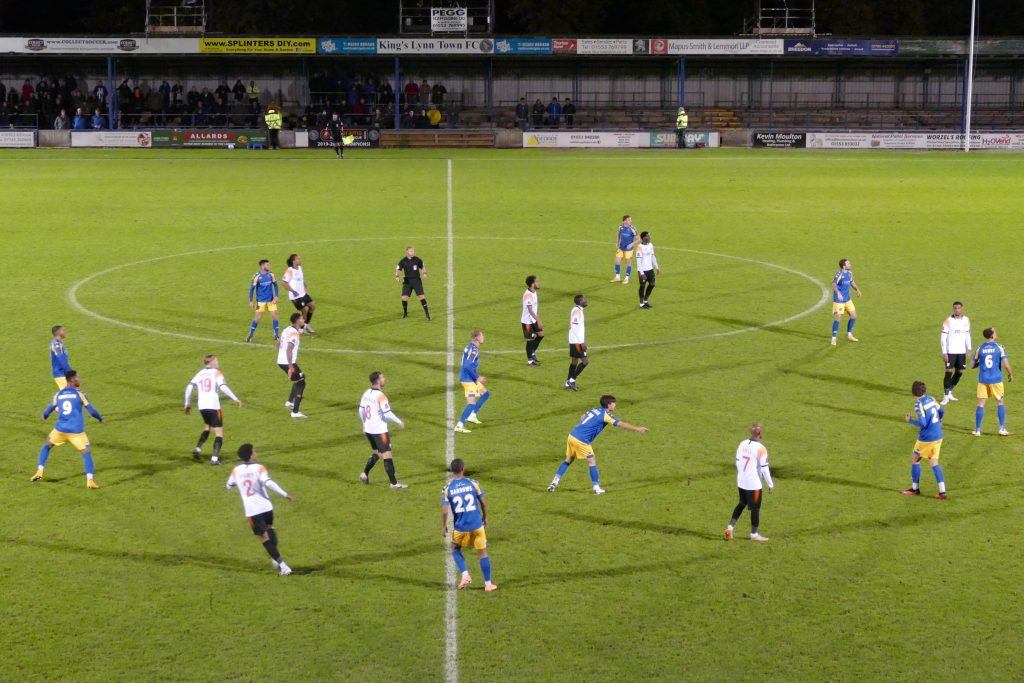 The Bees secured a well-earned point in an eventful evening at The Walks Stadium – drawing 1-1 with King’s Lynn Town in the Vanarama National League.

The Bees took an early lead after three minutes when Rob Hall collected the ball down the right side and whipped into the centre of the box to Joe Widdowson who rifled the ball into the top left corner on the turn.

After a good spell of pressure following the opening goal, Ian Culverhouse’s side looked to find an equaliser when Joe Rowley drove into the final third before unleashing a powerful strike from distance that went just wide of the post.

Sam Sargeant was then called into action shortly afterwards when Gold Omotayo held the ball up inside the penalty area before laying off to Malachi Linton who fizzed his shot goalwards to force a reaction save from the Bees’ stopper.

The Linnets got back on level terms in the 22nd minute when Michael Clunan had the ball laid to him from the edge of the box as he fired the ball low and hard into the bottom left corner.

Sargeant was called into action once again when Ethan Coleman dipped his 25-yard free-kick over the wall to force the Bees’ No. 1 into a diving save.

The Linnets created another chance to score moments later after Omotayo knocked the ball down to Ross Barrows inside the area who lashed his first-time effort over the goal from several yards out.

As the match approached the interval Ephron Mason-Clark came down the left flank before picking out Hall on the edge who had his initial shot saved well by Paul Jones.

The Bees’ No. 7, on his first start for the Club, picked up the half-cleared ball before sending the rebound over the crossbar.

The second period started evenly but it was the hosts who had the first real opening when Rowley floated a free-kick towards the back stick.

Richards-Everton rose highest to nod the header only as far as Clunan on the edge who had his shot blocked by some brave defending.

Rowley looked to be the provider again in the 66th minute when he charged into the final third on the break before feeding through Linton, who took the ball in his stride and fired wide of the near-post.

King’s Lynn were awarded a penalty in the 71st minute when Widdowson was adjudged to have handled a cross into the box.

Omotayo placed the spot-kick to the bottom left corner but Sargeant was equal to it and parried the ball away to Barrows who struck the rebound just wide of the mark.

The Bees looked to find a winning goal in the 78th minute when Mason-Clark weaved past his defender in the final third before sending the ball over to Brundle who had his powerful strike stopped by a King’s Lynn defender.

Kian Flanagan picked up the loose ball and found space to get his shot away just past the upright from 20-yards out.

The Linnets almost scored in second-half stoppage time when Kyle McFadden rose highest to flick his header across goal. Flanagan reacted quickly and managed to scoop the ball away to safety.

Dean Brennan’s side responded instantly and almost scored a snatced all three points in the closing stages of the game.

Mason-Clark dribbled down the wing and found an unmarked Daniel Powell in the middle of the area, who struck his first-time shot off the top of the crossbar to end an eventful evening in Norfolk.