Barnet were back in action after a 10-day break due to the postponed fixture on Saturday.

Dean Brennan named a changed team and welcomed Danny Collinge back into the starting eleven.

The teams took to the pitch with the rain falling. Before kick-off, both clubs observed a minute of silence and sang the national anthem to mark the passing of Her Majesty The Queen. 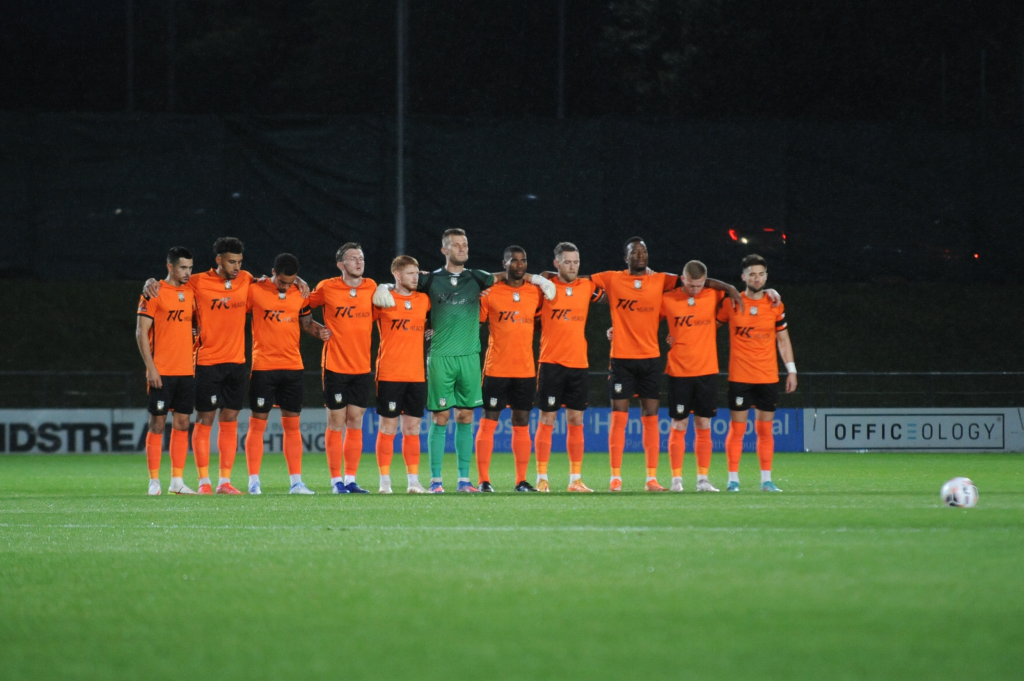 Barnet dominated the opening stages of the game. In just the 3rd minute, the Bees had an incredible chance. The ball from the right was whipped in by De Havilland and was met by Collinge who sliced the ball over from just 6-yards.

Dean Brennan’s side again came close in the 7th minute. A ball was played in from the left and Kabamba and Shields both swung at it and was somehow saved.

In the 15th minute, Dale Gorman had his first chance of the half with an effort from the edge of the box. His venomous volley just passed the right post and went out for a goal-kick.

Dorking’s first chance of the half came just 5 minutes later. A whipped ball from the left was met with a header on the penalty spot. Fortunately for Barnet, Collinge was able to block and deal with the effort.

Harry Pritchard had an effort in the 29th minute. He received the ball from 30 yards out and took it past two defenders. His shot beat the keeper, but also beat the bar and went over! A brilliant bit of play.

Against the run of play, Dorking took the lead in the 32nd minute. A cross from the right was on target and beat a flagging Laurie Walker to put the visitors in the lead.

Barnet almost responded with a chance from Pritchard again. Ryan De Havilland received a powerful pass and manages to get it out of his feet. He passed it to Pritchard who shot first time. His rising shot is blasted over the bar and the scores remained level at Half-Time.

The second half began with a Dorking chance. A corner was whipped in and met with an incredible volley. The ball looked like it was heading in, but the Barnet No.1 – Laurie Walker, was able to get down low and make a terrific save to his left.

Dorking had another chance just a few minutes later. The visiting winger dribbled past Okimo and flashed one across the face of the goal and went it went out for a corner. From the resulting corner, Barnet counter with a brilliant sweeping move. Shields received a long ball on the right side of the pitch. He dribbled past three individuals and launched an incredible shot destined for the top corner. Sadly for Sean, the Dorking keeper managed to get a fingertip to the ball to see it over.

Barnet continued to trouble the visitors as the weather worsened. A sustained bit of pressure in the 68th minute was almost finished by Ben Wynter who saw his effort from the edge of the box sail over the bar.

Rob Hall was introduced in the 70th minute and was immediately taken down. The ref was able to play an advantage and the ball was switched to Idris Kanu who shot from just outside the box. The attempt was comfortably saved by the Dorking keeper.

It was finally Dorking’s turn to go forward. Quick passing from the visitors saw them through on goal. Walker was forced into making a brilliant save down to his right to see the ball out for a corner that resulted in nothing.

With just 2 minutes to go, Barnet had the ball in the net. Moussa Diarra headed it in from a corning. Sadly for Barnet, the whistle had gone before the players had a chance to celebrate. Diarra was judged to have fouled his man in the lead-up.

Barnet has a penalty shout dismissed. The ball appeared to hit a Dorking hand in the box, but the Bees are disappointed as Dorking are able to see out the game for a 0-1 victory.